12 Warnings About US Debt Default

12 Very Ominous Warnings About What A U.S. Debt Default Would Mean For The Global Economy

A U.S. debt default that lasts for more than a couple of days could potentially cause a financial crash unlike anything that the world has ever seen before.  If the U.S. government purposely wanted to damage the global financial system, the best way that they could do that would be to default on U.S. debt obligations.

Because they are so close together, the “government shutdown” and the “debt ceiling deadline” are being confused by many Americans.

As I wrote about the other day, the “partial government shutdown” that we are experiencing right now is pretty much a non-event.  Yeah, some national parks are shut down and some federal workers will have their checks delayed, but it is not the end of the world.  In fact, only about 17 percent of the federal government is actually shut down at the moment.  This “shutdown” could continue for many more weeks and it would not affect the global economy too much.

On the other hand, if the debt ceiling deadline (approximately October 17th) passes without an agreement that would be extremely dangerous.

And if the U.S. government is eventually forced to start delaying interest payments on U.S. debt (which could potentially happen as soon as November), that would be absolutely catastrophic.

Once again, just don’t take my word for it.  The following are 12 very ominous warnings about what a U.S. debt default would mean for the global economy…

#1 Gerald Epstein, a professor of economics at the University of Massachusetts Amherst: “If the US does default, that will make the Lehman Brothers bankruptcy look like a cakewalk”

#2 Tim Bitsberger, a former Treasury official under President George W. Bush: “If we miss an interest payment, that would blow Lehman out of the water”

#3 Peter Tchir, founder of New York-based TF Market Advisors: “Once the system starts to break down related to settlement and payments, then liquidity disappears, as we saw after Lehman”

#5 Jim Grant, founder of Grant’s Interest Rate Observer: “Financial markets are all confidence-based. If that confidence is shaken, you have disaster.”

#6 Richard Bove, VP of research at Rafferty Capital Markets: “If they seriously default on the debt, what we’re really talking about is a depression”

#7 Chinese vice finance minister Zhu Guangyao: “The U.S. is clearly aware of China’s concerns about the financial stalemate [in Washington] and China’s request for the US to ensure the safety of Chinese investments.”

#8 The U.S. Treasury Department: “A default would be unprecedented and has the potential to be catastrophic: credit markets could freeze, the value of the dollar could plummet, U.S. interest rates could skyrocket, the negative spillovers could reverberate around the world, and there might be a financial crisis and recession that could echo the events of 2008 or worse”

#9 Goldman Sachs: “We estimate that the fiscal pull-back would amount to 9pc of GDP. If this were allowed to occur, it could lead to a rapid downturn in economic activity if not reversed quickly”

#10 Simon Johnson, former chief economist for the IMF: “It would be insane to default, but it’s no longer a zero-percent probability”

#11 Warren Buffett about the potential of a debt default: “It should be like nuclear bombs, basically too horrible to use”

#12 Bloomberg: “Anyone who remembers the collapse of Lehman Brothers Holdings Inc. little more than five years ago knows what a global financial disaster is. A U.S. government default, just weeks away if Congress fails to raise the debt ceiling as it now threatens to do, will be an economic calamity like none the world has ever seen.”

A U.S. debt default could be the trigger for the “nightmare scenario” that so many people have been writing about in recent years.  In fact, it could greatly accelerate the timetable for the inevitable economic collapse that is coming.  A recent Yahoo article described some of the things that we would likely see in the event of an extended U.S. debt default…

A default would upend money markets, destroy bond funds, slam the brakes on lending, cause interest rates to spiral, make our banks insolvent, and deal a blow to our foreign trading partners and creditors around the globe; all of which would throw the U.S. and the world into economic disarray.

And of course stocks would crash big time.  Deutsche Bank’s David Bianco believes that if the U.S. government starts missing interest payments on U.S. Treasury bonds, we could see the S&P 500 go down to 850 by the end of the year.

There would be almost immediate panic among ordinary Americans as well.  In fact, it is being reported that some banks are already stuffing their ATM machines will extra cash just in case…

With just 10 days left to raise the debt ceiling and congressional Republicans threatening to force the government to default on its obligations, banks are taking some dramatic steps to prepare for the economic chaos that would result should the brinkmanship continue.

The Financial Times reports that one major U.S. bank has started stuffing its automatic teller machines with extra cash in preparation for a possible bank run from panicked depositors. The New York Times reports that another bank is weighing a plan to advance funds to customers who rely on Social Security and other government payments that could stop in the event of a default.

Let’s hope that cooler heads will prevail and that a U.S. debt default will be avoided.

Unfortunately, it appears that the Democrats are absolutely determined not to be moved from their current position a single inch.  They have decided to refuse to negotiate and demand that the Republicans give them every single thing that they want.

And who can really blame them for adopting that strategy?  After all, it has certainly worked in the past.  Whenever Democrats have stood united and have refused to give a single inch, the Republicans have always freaked out and caved in eventually.

Will this time be any different?

The funny thing is that once upon a time, Barack Obama was adamantly against any increase in the debt limit.  The following comes courtesy of Zero Hedge… 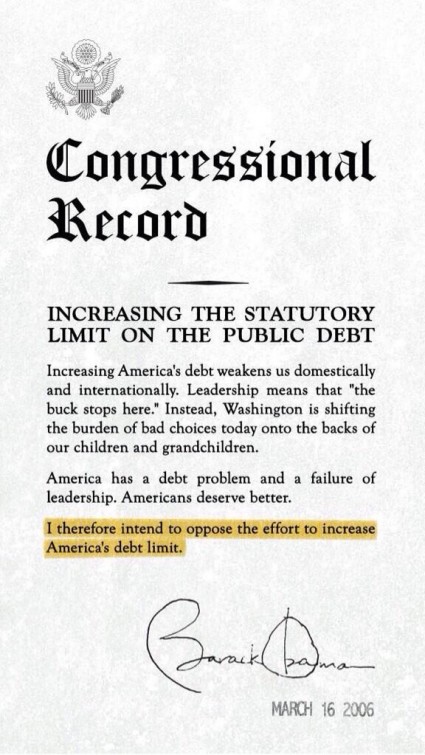 But now Obama says that it is so unreasonable to be opposed to a debt limit increase that any negotiations are out of the question.

So which Obama is right?

If the Democrats will not negotiate, a debt default could still be avoided if the Republicans give in.

And that is what they always do, right?

Perhaps not this time.  Just check out what John Boehner had to say on Sunday…

“I, working with my members, decided to do this in a unified way,” the speaker said — with demands to defund, delay or otherwise alter the Affordable Care Act.

Boehner had expected that the Obamacare fight would come during the next vote to raise the debt ceiling, “but, you know, working with my members, they decided, let’s do it now,” he said. “And the fact is, this fight was going to come, one way or another. We’re in the fight. We don’t want to shut the government down. We’ve passed bills to pay the troops. We passed bills to make sure the federal employees know that they’re going to be paid throughout this.”

“You’ve never seen a more dedicated group of people who are thoroughly concerned about the future of our country,” he said of House Republicans. “It is time for us to stand and fight.”

But will the Republicans really stand and fight?

In the past, betting on the intestinal fortitude of the Republican Party has been a loser every single time.

The mainstream media has certainly been placing most of the blame at the feet of the Republicans, but at least the U.S. House of Representatives has been trying to get an agreement reached.  The House has voted 26 times since the Senate last voted.  Harry Reid has essentially shut the Senate down until the Republicans fold and give the Democrats exactly what they want.

The funny thing is that this could probably be solved very easily.  If the Democrats agreed to a one year delay to the individual mandate, the Republicans would probably jump at it.  And because of epic technical failures, hardly anyone has been able to get signed up for Obamacare anyway.  So a one year delay would give the Obama administration time to get their act together.

Unfortunately, the Democrats seem absolutely obsessed with the idea that they will not give the Republicans one single inch.  They seem to believe that this will be to their political benefit.

But this is a very dangerous game that they are playing.  The U.S. government must roll over 441 billion dollars of short-term debt between October 18th and November 15th.

If a debt ceiling increase is not in place by that time, it will send interest rates soaring.  Borrowing costs for state and local governments, corporations, and ordinary Americans will go through the roof and economic activity will be hit really hard.

And as detailed above, we could potentially be looking at a financial crash that would make 2008 look like a Sunday picnic.

So let us hope for a political solution soon.  That will at least kick the can down the road for a little bit longer.

If a debt default were to happen before the end of this year, that would bring a tremendous amount of future economic pain into the here and now, and the consequences would likely be far greater than any of us could possibly imagine.