This opinion article in the Guardian seems to sum up the situation in a way that resonates with what I've felt was happening. Namely that the Greeks are being sacrificed to "appease the Gods of speculation". Many posts following the article say "so what?" Seems callous to me but are they missing the point? That countries are now "economies" rather than "societies"?

Is this article off base??

Shame on Europe for betraying Greece 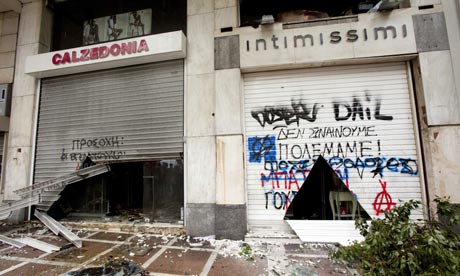 'We condemn Greece to misery and poverty to keep Standard & Poor’s off our backs. But we have miscalculated.' Photograph: Argyropoulos/Sipa/Rex Features

The behaviour of the EU states towards Greece is inexplicable in the terms in which the EU defines itself. It is, first and foremost, a failure of solidarity.

The "austerity package", as the newspapers like to call it, seeks to impose on Greece terms that no people can accept. Even now the schools are running out of books. There were 40% cuts in the public health budget in 2010 – I can't find the present figure. Greece's EU "partners" are demanding a 32% cut in the minimum wage for those under 25, a 22% cut for the over 25s. Already unemployment for 15-24-year-olds is 48% – it will have risen considerably since then. Overall unemployment has increased to over 20%. The sacking of public sector workers will add to it. The recession predicted to follow the imposition of the package will cause unbearable levels of unemployment at every level.

In addition the "package" demands cuts to pensions and public service pay, wholesale privatisation of state assets – a fire-sale, since the global market is close to rock bottom – and cuts to public services including health, social welfare and education. The whole to be supervised by people other than the Greeks. An entire disciplinary and punishment system.

When we casually use a term like "bailout", it is important to remember that it is not people who are being bailed out, or at least not the Greek people. The bailout will not save a single Greek life. The opposite is the case. What is being "bailed out" is the global financial system, including the banks, hedge funds and pension funds of the other EU member states, and it is the Greek people who are being ordered to pay – in money, time, physical pain, hopelessness and missed educational opportunities. The relatively neutral, even stoic, term "austerity", is a gross insult to the Greek people. This is not austerity; at best it is callousness.

On top of this callousness, we must remember that the strategy itself is nonsense. Every intelligent observer is agreed that cuts do not produce growth. The highest rate of growth in the EU at present is in Poland where massive public investment is driving the economy. GDP is declining or barely moving among the "austerity" nations, including the UK.

In essence, this crisis is a failure of the EU states to show solidarity in the face of an onslaught from the financial markets. At first glance this seems to be a very simple fight. In one corner you have nation states, which have the wellbeing of their citizens as their raison d'être; in the other you have global capitalism as represented by the financial markets, which has the wealth of a tiny few as its raison d'être. But the nation state has, for a considerable time, identified itself with those same markets. States have agreed to see themselves as economies rather than societies. More recently we have been led to believe that the market alone can provide everything the citizen needs and much more efficiently than the structures that the citizens normally rely on and which they have, over generations, erected as protections against the revenge of the market.

This is the triumph of capitalism, that it has persuaded the world that capitalism is the world.

It has led to the undoing of 200 years of struggle between ordinary people and the super-rich. Trade unions didn't appear overnight, they were a response to exploitation. Their defeat has led to the ubiquity of precarious, and now free, labour. Workers are not protected in their workplace by capitalists, they are protected by the laws won by struggle against the capitalist. A sweatshop in China is a direct assault not just on the rights of the Chinese worker but on those of workers in, for example, the UK. Socialist internationalism and solidarity were conceived as a way of defeating that ploy. Old people do not die in the streets not because charity has saved them but because 200 years of struggle has brought us the old age pension and public health. The privatisation of those services is a return to the 19th century. None of this public good would have been won if people had identified with the super-rich of 1812. Now that we have been brought to such an identification, we stand to lose them all over again.

Now we see capitalism at its most triumphant. Greek police beat Greek people in order to impose the will of the banks and hedge funds. The EU member states, including Ireland, are the middleman, the quislings of capital. Rather than reach out a hand of solidarity, we say, "better them than us". As if the global markets will choose to pass on Ireland once Greece has been destroyed. Solidarity is not just compassion for one's fellow man; it is also materialist self-interest. One for all and all for one. We stand or fall together. There is strength in unity.

Instead we have decided to sacrifice the Greek people to the market in the hope that our sacrifice will appease the gods of speculation. We condemn them to misery and poverty to keep Standard & Poor's off our backs. But we have miscalculated. Firstly, the communist left currently stands at 42% in the polls, Pasok at 8%. Pasok (the leading party in government) will vanish and a combination of real leftwing parties will win the next election. They will not bend the knee and put their necks on our block.

It seems to me now that Greece will withdraw from the euro and default on its debt. Who knows what will happen to it then, but it can hardly be much worse than what we want from them, and at least it will be something of their own choosing. The speculators will then take a little time to consider which of the other economies to bet on. Perhaps then the Irish government will regret its lack of solidarity. Whatever happens, our behaviour and that of our EU compatriots has been shameful.

... the failings of a socialist approach to running a nation. All peole must be willing to contribute to the betterment of all and recieve all they need for sustenance in return. We will support only those who are truly unable to do for themselves. Share all you have with your community whatever your estimation if community is.

This article is right on the money.  The global financial crisis is no accident.  It's a carefully planned scheme by a minority of wealthy families to fleece the world's wealth in order to control the global populous.  If you doubt it, ask yourself why every country in the world is broke and in debt right now.  Why is it that the only people/entities with any wealth are the banksters and the corporations they own?

BTW, This is happening under the guise of Capitalism.  Blaming Capitalism, Socialism, Communism, the welfare system, mortgagors or anything else for the crisis is playing right into the larger plan to "divide and conquer" us.   It's time we stop blaming each other (roughly the 99.9%) for the insidious plot of the .1%.  If we are ever to rise above Financial Tyranny, we must recognize the true origins of the problem and unite as one people to fix it.

If you want to stay up to date with what is occuring in the global financial markets, (which affect EVERYONE), Max Keiser is an excellent source.  Here are two of his recent shows about what is happening in Greece:

This is a Democracy Now! report about Greek Austerity measures and how they affect the rest of the world.  In case you haven't noticed, similar cutbacks on public services are already occuring in the United States.  Whether it's labeled 'austerity' or not, the U.S. government is implementing the same type of cuts as the Grecian leadership.  Left unchecked, millions of people will struggle just to survive.  The Occupy Movement understands this.

Greece is bracing for protests after eurozone finance ministers concluded a deal that will provide a $170 billion bailout in return for another round of deep austerity cuts. The bailout is opposed by several unions and left-wing groups in Greece over new cuts and layoffs imposed on public sector workers. We’re joined by Paul Mason, economics editor at BBC Newsnight and author of the new book, "Why It’s Kicking Off Everywhere: The New Global Revolutions." He has just returned from Greece. "What makes the headlines are, of course, the riots," Mason says. "What doesn’t make so many headlines is what is happening to real people... We are living in a time where the world has, in the last couple of years, erupted in a way that many people thought they would never see again since the 1960s... The underpinnings of this new global unrest are that...people are sick of seeing the rich get richer during a crisis."

If you haven't read it yet, David Wilcocks' recently completed investigation into financial tyranny exposes the entire history of this long running plot. Incredible read and ties together a lot of other smaller revelations from other sources.

"that...people are sick of seeing the rich get richer during a crisis."